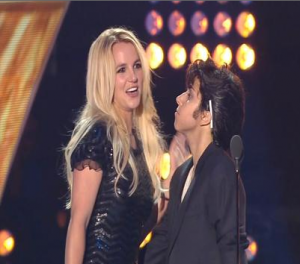 Britney Spears is no stranger to kissing girls at the VMAs, but last night she declined a kiss from Lady Gaga. In 2003 at the VMAs, Spears locked lips with Madonna.

Last night when Spears won the award for VideoVanguard during the show, Gaga, who was dressed as her alter-ego Jo Calderone, looked into her eyes and leaned in. The pair came thisclose to kissing before Spears pulled away and tried to laugh it off. “I’ve done that already” she said, laughing nervously while at the podium.