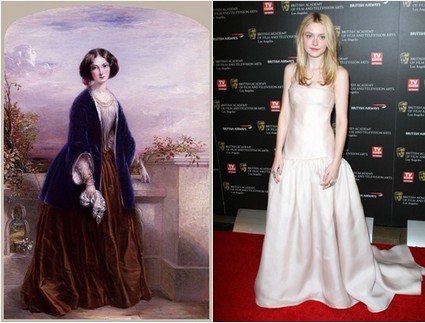 Emma Thompson is now a director and she will have the help of talented Dakota Fanning in the biopic ‘Effie.’

Fanning will play the wife of the famous Victorian art critic, John Ruskin. Their marriage was notoriously unhappy, eventually being annuled in 1854 on grounds of John’s “incurable impotency,” a charge Ruskin later disputed, even going so far as to offer to prove his virility at the court’s request. In court, the Ruskin family counter-attacked Effie as being mentally unbalanced. Effie later married the artist John Everett Millais, who had been Ruskin’s protégé, in July 1855, and bore eight children.

Talk about the dysfunctional family!

Fanning will be joining other cast members Julie Waters and Derek Jacobi, while Thompson’s real-life husband Greg Wise will play the eccentric Ruskin.

Thompson is to appear as Lady Eastlake who becomes the young woman’s confidant.

Fanning will next be seen ‘Breaking Dawn’ and is also attached to the role of a teenage Princess Margaret in the film Girls’ Night Out.’

Abercrombie & Fitch Pays The Situation not to Wear Brand