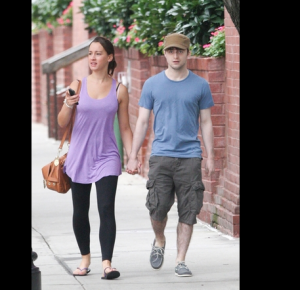 Daniel Radcliffe was spotted in New York City holding hands with his girlfriend Rosanne Coker. The pair met on the set of the sixth Harry Potter film. Coker was working as a production assistant on “Harry Potter and the Half-Blood Prince” as well as the final two instalments. She also is working on the set of Radcliffe’s new movie.

The pair have been together for a year now. Coker’s dad stated, “They would really prefer to keep things quiet. But Rosanne has worked on the last three ‘Harry Potter’ films, so she and Daniel have known each other quite a long time. But they have been going out for just over a year now. I have met Daniel and he is a lovely guy. I’m just really happy for Rosanne, and as long as she is happy that is all that matters to me.”

While on Larry King, Radcliffe mentioned his lady lover by saying, “I’ve got a girlfriend at the moment, who I am very much in love with. So you know, we’ll see where that goes.”

Demi Lovato Behind The Scenes Video For Her Elle Photoshoot