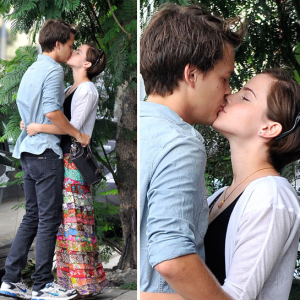 Emma Watson, 21, and Jonny Simmons, 24, both star in “The Perks of Being a Wallflower,” a “relationship movie about love and finding your place in the world.”

“They were all over each other, kissing and hugging. It was very sweet to see. She looked utterly besotted… They’re obviously head-over-heels in love,” a source reportedly told London’s Daily Mail. ‘The moment Johnny turned up Emma was all over him. He stayed overnight at least one night this week. It is clearly a serious relationship,” the source added.

Simmons wasn’t the only one who spent the night with Watson, though.

Selena Gomez Cleaned Up At The 2011 Teen Choice Awards

Selena Gomez and Demi Lovato at The 2011 Teen Choice Awards