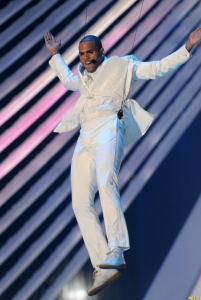 While Chris Brown was performing at the VMAs Sunday night, he realized his watch was coming loose. To avoid it getting in the way of his performance, he tried tossing it to a safe place on the side of the stage, but it ended up in the crowd. The watch was a $22,000 diamond encrusted Rolex that was “gold with a white oyster face and diamond-encrusted bezzle.”

While Brown expected the watch to be gone forever, it was much to his surprise when it was returned to him! When the performance was over, his bodyguard was sent into the crowd to ask around for it, but didn’t expect to have much luck. Surprisingly, a fan came out and returned it to the bodyguard.

A rep stated, “Although Chris did not get to meet the fan, he is very appreciative of the fan’s actions.”