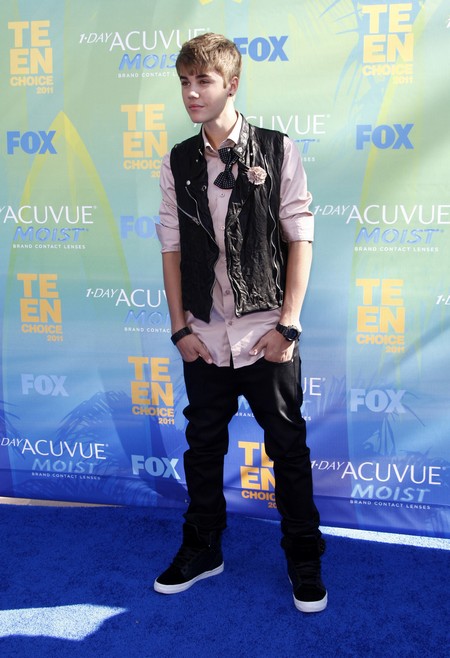 When your Justin Beiber and your outfit becomes the main topic of conversation you know that it was really hot or really not. Justin left fans bewildered with his strange choice of attire at the 2011 Teen Choice Awards in Los Angeles on Sunday.   The 17-year-old superstar, who did not appear on the red carpet with girlfriend Selena Gomez, wore an outfit described as “very, very, odd”.

Justin, who scooped the award for ‘Best Male Artist’ and ‘Best Male Hottie’, arrived at the ceremony in his usual black trousers and sneakers – but his top half left some commentators confused.

The ‘Baby’ hit-maker wore a leather vest over a button down shirt, with a ‘sideways bow tie’ and silk flower. In contrast, critics had no reservations with Selena’s outfit – a silky gold Erin Fetherston dress with cream ribbon. The singer also pipped her boyfriend to the evening’s awards, scooping five in total including ‘Best TV Actress’, ‘Best Female Hottie’ and ‘Best Music Group’ with her band The Scene.

Gomez also walked home with the award for ‘Best Love Song’ for ‘Love You Like a Love Song’, which she later performed at the star-studded ceremony.

Rumours surfaced last week that suggested the high-profile couple had split, but the duo were photographed getting close later in the ceremony.