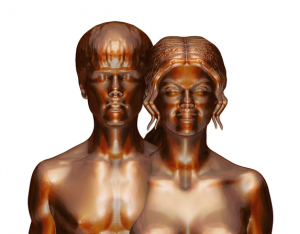 American sculptor Daniel Edwards has just unveiled a nude portrait of superstar celeb couple Justin Bieber and Selena Gomez nude while joined at the torso. The couples private parts are covered with a Canadian maple leaf and a Texas lone star. Bieber is from Ontario and Selena hails from Grand Prairie, Texas.

The whole statues of the Biebs and his girl will be revealed at Dallas’s New Fine Artsat. The date is still unnanounced. Is this statue just too weird?