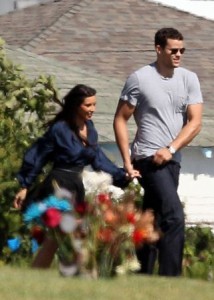 The grave of Robert Kardashian is located at Inglewood Cemetery. Robert was an attorny most notorious for working on the O.J. Simpson defense team. Rob passed away in 2003 from cancer.

The couple was seen hugging as a woman stayed by them with a handheld camera. The filming could have been for either the Kardashian’s reality show, or more likely the two-part wedding special set to air in October. The couple seemed to look pretty cheerful the whole time, despite their location.

The two are set to get married on Saturday, August 20.

Rebecca Black Gets Bullied Out Of School