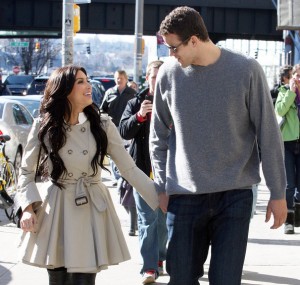 Kim wore a Vera Wang dress that was described as including a “full tulle skirt, basque waist and hand-pieced Chantilly lace appliqué on the bodice and train.” The bride also wore Guiseppe Zanotti shoes. Humphries wore a Ermenegildo Zegna tux with a white tuxedo jacket and black tuxedopants and was finished off with a white bow tie.

Kourtney and Khloe, Kim’s sisters, noth served as her maid of honors. The other bridesmaids were Kim’s half-sisters Kylie and Kendall Jenner. Their dresses were all green. Kourtney’s son, Kim’s nephew, Mason Disick, served as the ring bearer. Kim followed up the ceremony with two dress changes, both Vera Wang creations. People spent $1.5 million to have all public photo rights for the wedding for an issue that will be published Friday.