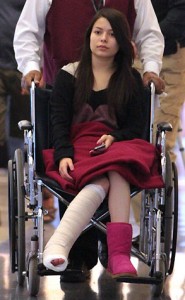 Miranda Cosgrove and her crew suffered from a scary tour bus accident that sent many people to the hospital. The 18-year-old iCarly star was spotted at LAX in a wheelchair in a cast due to a broken right ankle and toe. The accident was caused when her bus collided with a tractor trailer in Illinois while the star was on her way to a concert in Kansas.

The people injured included Miranda’s mom, and the bus driver Randy McClure, who suffered the worst injuries. McClure had to be cut from the wreckage and is still in the hospital, but is in stable condition.

“Thank u so much for all your messages,” Cosgrove tweeted following the crash. “They mean so much to me. Yesterday was extremely scary & I’m just so happy everyone’s going to be okay.”

The tour has been postponed until further notice.

Hailee Steinfeld Picks Up A Swag Bag at A Party