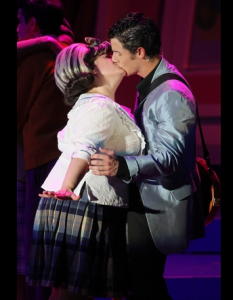 Nick Jonas’s girlfriend, Delta Goodrem, is 26-years-old, which is 8 years older than the youngest Jonas brother. If that hasn’t caused enough of a stir, Nick planted a big one on a woman 20 years older than him! Turns out it is all for show, as the woman is Marissa Jaret Winokur and the kiss was for a celeb-cast performance of “Hairspray” at the Hollywood Bowl last night.

Goodrem was in the audience watching her sweetie plant one on the 38-year-old. Nick, who played Link Larkin, made all the girls in the audience scream whenever he went on stage. Winokour played the original Tracy Turnblad on Broadway, then later went on “Dancing with the Stars.” Next she hosted “Dance Your Ass Off.”