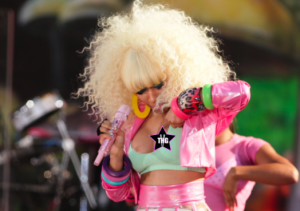 Nicki Minaj made a guest appearence on “Good Morning America” this morning and experienced a severe wardrobe malfunction. During her performance, her left nipple came out of her very low-cut top and was fully revealed. While the whole East Coast received a good view of the stars breast, it was cut out of later showings of the show.

While ABC had a 5-second delay in play, they missed the nip slip and it accidentaly aired. A spokesperson for ABC stated,  “Although we had a five-second delay in place for the Nicki Minaj concert on GMA , the live East Coast feed of the concert regrettably included certain fleeting images of the performer that were taken out of later feeds of the broadcast in other time zones.”

The rep adds, “We are sorry that this occurred.”