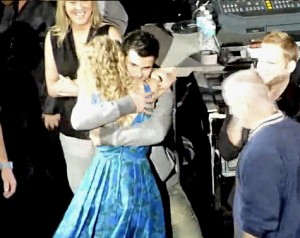 Taylor Swift performed at the Staples Center in Los Angeles on Sunday, August 28. The concert was very star-studded and Swift made sure to take the time to greet her celebrity friends. The 21-year-old started out the hug fest with Reese Witherspoon, who was accompanies by her two kids, Ava and Deacon.

Taylor and Reese were spotted out for lunch just two days before the show. The star continued down the aisle and hugged Garrett Hedlund as well as her ex-boyfriend Taylor Lautner.