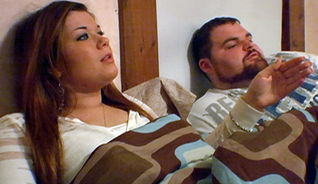 Teen Mom Amber Portwood is currently in rehab at Seasons Recovery Center in Malibu, Calif.    She is having a hard time getting her depression under control.  The distraction of television cameras following her is not helping matter.

OK! has the scoop: “She’s trying to get a handle on her depression.  But rehab isn’t turning out the way she’d hoped. She can’t relax with Teen Mom filming and cameras in her face. She’s sleeping almost constantly. She’s slurring her words and wobbly.”

Amber still resent the father of her daughter Gary Shirley because he has custody of her.   Amber can finally talk to him without going ballistic.  She is talking medicine to keep her more balanced and less angry.

That will be a change generally Gary spends 1/2 his time chasing her and they spend the other 1/2 fighting.  No surprise she is struggling with rehab.  Doing it in front of the camera is not easy.