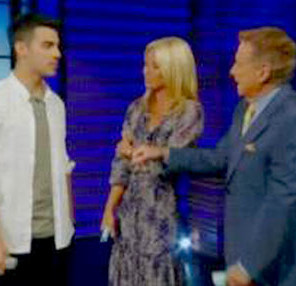 Joe Jonas appeared on “Live With Regis And Kelly” on September 8th. Jonas performed his new single “I’m Sorry.” After the song, Regis Philbin and Kelly Ripa talked with Jonas about the song and he revealed that it was an apology to a girl who’s heart he broke, but he withheld the name of the ex.

Some of Joe’s exes include Demi Lovato, Ashley Green, and Taylor Swift, so it could be to any of these stars, but as we previously reported, sources say that Jonas has been trying to win Taylor Swift back over, so my vote goes that this is directed towards Ms.Swift.

Some of the lyrics include:

was it the things i said, can i take them back
baby, cause without you there’s nothing left of me
we can run away, we can change our fate
baby, what can i do to show you i’m sorry

Justin Bieber Talks About a Family