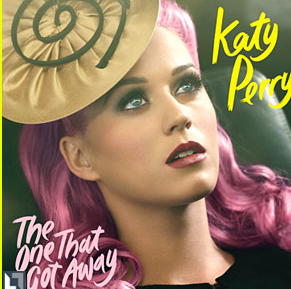 It was bound to happen sometime. A song that I considered my personal summer jam while nobody else knew it was way to good to be true, so now “The One That Got Away” by Katy Perry will be hitting the radio. Above is the new single art for the song.

The 26-year-old tweeted the picture along with the words, “The One That Got Away… It’s happening!!!” The song first started playing on the radio this Wednesday, September 28th.

This song is the sixth single off of Katy’s super successful album, Teenage Dream. Katy was the first woman, and only the second artist, behind Michael Jackson, to have five songs from one album hit #1 on the Billboard Hot 100. Will this be number six?

The easy-going song is about a past high school relationship and how it escaped Katy. While breakups seem bad now, Katy gives a refreshing, not-so-negative look on her ex and gives us hope for our future happiness, and maybe the reality that most teen relationships aren’t ment to last forever. I would definatly recommend listening to it.