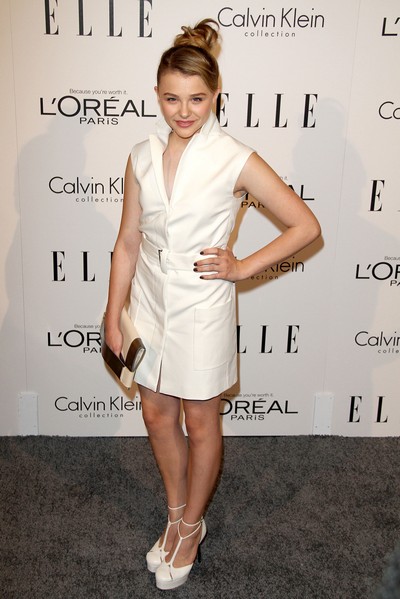 Working with Tim Burton exceeded all of Chloe Moretz’s expectations totally blew away the young star.

The 14-year-old actress filmed ‘Dark Shadows’ in the UK with Johnny Depp, Michelle Pfeiffer and Helena Bonham Carter earlier this year but admitted working with the legendary director was a highlight.

She said: “Tim Burton has always been one of my dream directors to work with. When I got a call and they said, ‘Tim Burton wants you to be in his movie,’ I was like, ‘Woah! Excuse me?!’ It was a lot to take in. It was very, very fun.”

“Working with him really did live up to all of my expectations, and actually went beyond everything I expected him to be. He was really one of the nicest and most normal guys I’ve ever met, but he has this brain. You get where everything comes from because his brain is just so creative.”

However, Chloe admitted she did get slightly star struck on her first day when she was shooting with Helena, Johnny and Michelle all at once.

She told Collider.com: “The first day I came on set, it was a dinner or breakfast scene with Helena [Bonham Carter], Johnny and Michelle, and literally the whole cast, sitting at this gigantic dinner table, and the scene was us, eating. For me to walk in and sit at this table with some of the most phenomenal actors, and then have one of the most amazing directors in the corner of the room, it was so, so, so surreal. I was able to just do so much. It really just flabbergasted me.”

‘Dark Shadows’ is expected to be released in 2012 and I will be first in line to see it. Can Johnny Depp live up to the amazing performances of Jonathon Frid who played the original Barnabas Collins?

Florence Welch Was Drunk When She Began Album