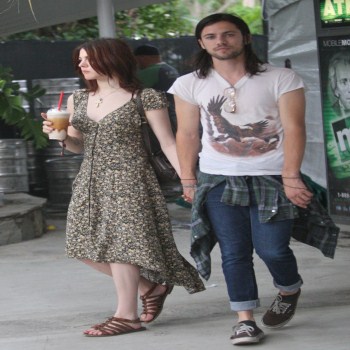 Frances is the daughter of late Nirvana frontman Kurt Cobain and Hole singer Courtney Love and she said “yes” after her Isaiah Silva popped the question confirming the happy news on her Facebook page.

Frances had changed her status on the social networking website to ‘engaged’ – but has since removed this – and posted: “Getting to spend the rest of my life loving my best friend makes me the luckiest woman in the world.”

Frances – who was just 20 months old when her father committed suicide in April 1994 – and Isaiah have been dating for over a year and since getting engaged have now moved into together in a house in Los Angeles.

A source told In Touch Weekly magazine: “Yes, she’s engaged and they moved in together in a big house near Runyon Canyon.”

Frances moved out of her mother Courtney’s home in 2009 to be cared for by Kurt’s family, and the ‘Malibu’ singer recently accepted responsibility for their estrangement.

Courtney, 47, said: “It was my fault. I never read to her. Why didn’t I ever take her to a Broadway show? She f***ing loved those Broadway musicals!

“All I can feel is how much I love her. I’d give anything to hear the sound of her heels walking down the hall past my bedroom.  I swore I’d never be like my mother but I’m just the same. She threw it all away and I threw it all away.”