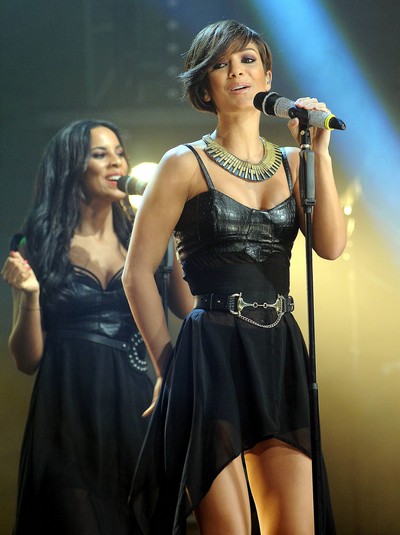 ‘The Saturdays’ star singer, Frankie Sandford, has checked into a rehab clinic.  Frankie – who is in a relationship with Manchester City soccer player Wayne Bridge, 31 – has admitted herself into an unknown facility for “unconfirmed reasons.”

Frankie’s spokesperson is adamant that she is NOT receiving treatment for alcohol or drug related issues. The 22-year-old pop beauty revealed she hadn’t “been very well” in a twitter message to her bandmates Una Healy, Mollie King, Vanessa White and Rochelle Wiseman at the weekend.

She wrote on her page: “Sorry I haven’t tweeted in a while. I’ve not been very well. Miss u @MollieTheSats @unahealy @vanessawhite @RochelleTheSats I’ll b back soon x”

Frankie missed several band commitments in the last week, including a visit to a new Marie Curie Hospice Centre being built in Solihull, West Midlands, England.

Lady Gaga And Bruno Mars On MTV For EMAs