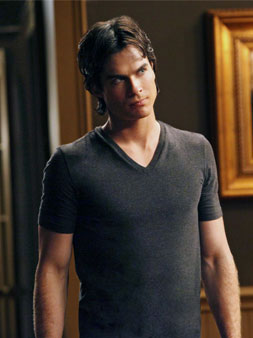 Tonight is the seventh episode of The Vampire Diaries and it is called ‘Ghost World.’  On last week’s episode Bonnie and Matt were still reeling from recent events, while Tyler seems to be enjoying being a hybrid.  Stefan continues to carry out his latest assignment from Klaus.  If you missed last week’s episode read our official recap here!

Official Synopsis: NIGHT OF ILLUMINATION – As Mystic Falls prepares to celebrate the traditional Illumination Night, the town is invaded by spirits of the dead. After a particularly violent encounter with an angry spirit, Damon asks Bonnie to find the reason behind the ghosts’ surprising power. Elena convinces Jeremy to use his connection to the other side to help her find a new way to reach Stefan, leading Jeremy to a terrible choice. Finally, Alaric discovers a long-hidden clue to the past. Candice Accola and Zach Roerig also star. David Jackson directed the episode written by Rebecca Sonnenshine.

Tonights recap:  The show opens with Damon tied to a chair and Mason Lockwood looking at him.  Damon says “you have to be kidding me” and his ring protecting him from sunshine is sitting on the carpet in front of him.

Damon sees Stefan and he tells him low blow, but Stefan tells him he did not do it.  As Lockwood looks on and when Stefan leaves he opens the curtains and Damon starts to burn.

Matt & Jeremy are at listening to the Mayor talking about the Night of Illumination when the town killed all the vampires.   Anna is with Jeremy and they are holding hands but no one can see Anna except Jeremy.

To read the rest of the update on the exciting show tonight head over to our to our sister site, Celeb Dirty Laundry