Twilight Stars Stewart, Pattinson, and Lautner Due For Hollywood Cementing 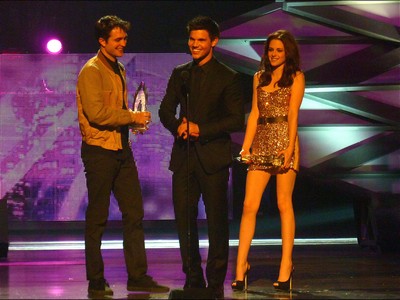 Kristen Stewart, Robert Pattinson and Taylor Lautner‘s hand and footprints are to be immortalized in concrete.

The ‘Twilight Saga’ trio – who play Bella Swan, Edward Cullen and Jacob Black in the vampire romance franchise – will take part in a prestigious handprint ceremony at Hollywood’s Grauman’s Chinese Theatre on November 3.  Hopefully the moon won’t be full when the ceremony takes place or Taylor’s prints might look like paw prints.

Cementing their places in cinematic history, the co-stars are three of just a few hundred actors in the history of film who have been bestowed with the honour.

The trio will join the likes of Johnny Depp, the late Marilyn Monroe and Bob Hope who are all immortalized in concrete on the pavement of the Hollywood hotspot.  Kristen, Robert and Taylor will all take part in a triple ceremony where they will cast their hand and footprints in cement.

Jennifer Aniston and Dame Helen Mirren are some of the most recent stars to have received the honour.