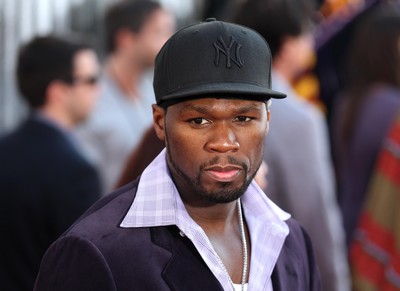 In my lifetime I have seen rappers go from encouraging violence and murder to promoting anti-bullying. And hear we have 50 Cent claiming his son has inspired his new anti-bullying book ‘Playground.’

The ‘In Da Club’ hitmaker – whose real name is Curtis Jackson – got the idea to write the tome after talking to 14-year-old Marquise Jackson about incidents he was aware of at his school between fellow pupils.

He said: “I was inspired to write this project based on a conversation with my son.”

“He was telling me about someone else who was experiencing being bullied around him, and in order to explain the scenario, I had to explain it from the actual bully’s perspective and say that he’s dealing with his emotions the wrong way.”

The hip-hop star’s novel tells the story of 13-year-old Butterball, who has separated parents and weight issues – but one day he takes his frustrations out on a classmate by lashing out at him, which gets him in trouble.

The ‘Candy Shop’ rapper also took some inspiration from Jeff Kinney’s “amazing” book ‘Diary of a Wimpy Kid’, which explores the hurtful side to bullying from the subject’s perspective.

He added: “When you think about it – because the book is amazing – but it’s about a kid being bullied, and we’re laughing at the character being bullied throughout the project.”

“It’s kind of negative when you think about it, because you are laughing at the kid being taken advantage of. But it was an interesting perspective to write it from, and it kept my interest the entire time I was going through the book, so at the end of it, you get the message.”