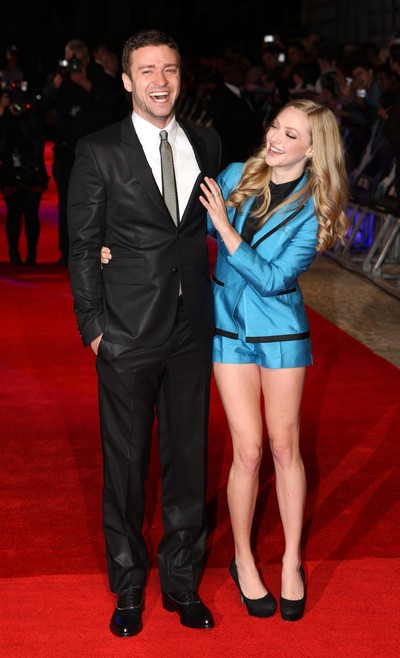 Amanda Seyfried has a big crush on Justin Timberlake. Amanda stars with the singer-and-actor in a new sci-fi thriller ‘In Time’ and Amanda has admitted she has had her eye on her handsome co-star – who recently reunited with girlfriend Jessica Biel – for some time and loved shooting their “sexy” scenes together.

Speaking at the movie’s UK premiere at the Curzon Mayfair cinema in London last night she told BANG Showbiz: “Oh yeah of course I fancy Justin, I’ve known him for a while, he’s awesome.”

“In the movie our characters have this instant connection. They immediately flirt and it’s awesome but then he takes her hostage because that’s the only way he sees to get out of this situation he’s in. And then she’s confused and their dynamic changes and it’s sexy and great.”

Amanda also revealed Justin loves to sing on set, especially anything by Cee Lo Green but said she was too embarrassed to join in with him.

She explained: “We didn’t have any sing-a-longs on set but he does sing a lot. I don’t sing when I’m around Justin, I’d be too embarrassed because he’s so talented. He was singing Cee Lo Green a lot.

“He’s awesome, he’s really fun and professional, just the perfect co-star. He made it all easier.”

Justin also walked the red carpet at the premiere last night and insisted despite his success on screen and on record he has remained down to earth and lives a completely normal life.

He said: “My life away from working on film or being in the studio is completely normal. I hang out with family, I watch football on Sundays. I’m just like everybody else.”