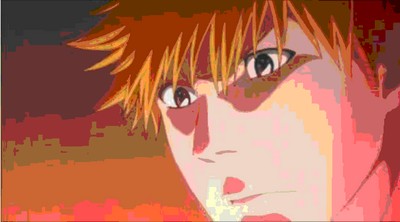 I just don’t know anymore, it’s sad to say but this arc is really boring me. I don’t really care for these new characters all that much and the supposed villain isn’t all that impressive his fullbring is called “Book of the End” and what does it do? It changes his bookmark into a sword….really? To be honest it just seems incredibly lame, I’m really not feeling this character.

Ichigo on the other hand has a pretty badass fullbring but it doesn’t seem to have any real significant abilities, it’s basically just used to slash with. I find that kind of disappointing but I guess it’s probably only at its first stage or something of the likes. So later on it’ll probably become something much stronger cause at the moment I’m not impressed! 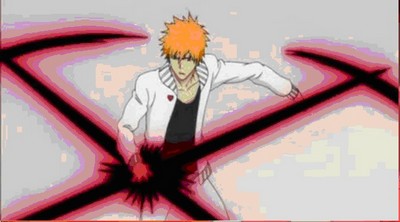 The only part I really found funny in this episode is what Mr. Pork actually looked like as a human, he looks like a big himself. But it’s funny he has a pig snout like nose, little round eyes and a funny moustache. Other then seeing him, I didn’t laugh at all throughout the episode.

Once again Orihime is the damsel in distress; I just find that she can be annoying at times. I just don’t really like this time skip, the arc is boring and I sometimes question if I’d like to even continue it. I find that incredibly sad since I really enjoyed Bleach and have been watching it for a long time. I really hope it gets better for me, because Bleach is really a great anime/manga and I just hate feeling this way towards it.