Anime Review: One Piece Episode 523 ‘The Man Who Protected The Sunny’

I was really excited for this episode because I was hoping that now the real journey would begin. Since the Straw Hats have finally escaped from the navy and have gone under the ocean on their way to Fishman Island. But this episode is filled with dialogue that reveals an interesting fact and there is a lot of great humor.

At first I was kind of disappointed how there was going to be no action in this episode, but the dialogue was very enjoyable especially the humor. For instance the ship is covered by that bubble and Nami goes to explain to Usopp and Chopper all the things that could possibly go wrong, after Luffy and Zoro are planning to see how many fish they can catch from inside, since it’s revealed that the bubble will not pop if they pass their arms through it, but if too many at a time do it, then it will. So then Chopper and Usopp get angry and hit them. 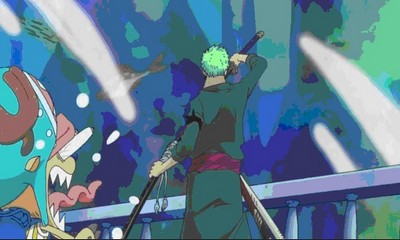 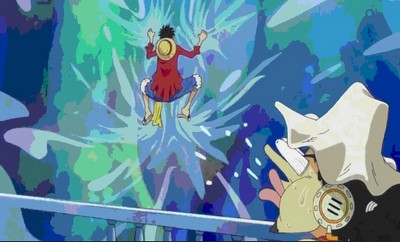 Lately the most hilarious character right now is Sanji, I like how every time he sees a beautiful women he gets a massive nosebleed strong enough that the pressure tends to blast him into the air. For example when he just looks at Nami he suddenly just blasted away through the bubble needing Luffy to have to bring him back in. 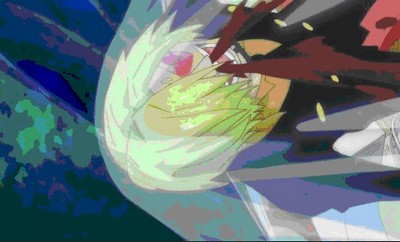 My most favorite part of this episode is when Franky gets serious and wants to reveal something to the whole crew but is interrupted by Luffy, Chopper and Usopp if it’s some other secret robot ability he has since he’s apparently a cyborg. But after that he reveals that Bartholomew Kuma, the person who separated them all 2 years ago was actually the one who protected their ship till they got back. He actually saved their lives 2 years ago to help them become stronger because he used to work for Luffy’s father. 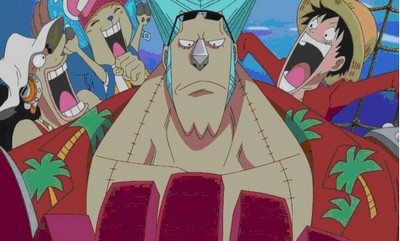 Right at the end of the episode Usopp starts to scan through out the water with his binoculars and happens to see another ship under the ocean as well headed for them. The ship crashes into them jeopardizing the durability of the bubble.

I really enjoyed this episode mostly because of the humor and because it’s got me so hyped to see what happens next. I especially can’t wait to see what Fishman Island looks like exactly. I really hope it’s shown in the next episode.