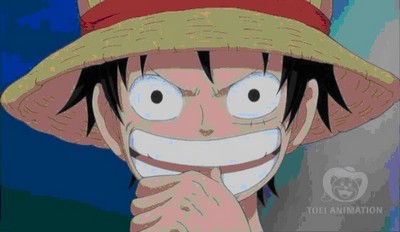 Personally I felt that this episode’s comedy was great. Especially right at the beginning we have Caribou and his crew prepared to board the Sunny when all of a sudden the creature pulling their ship is in fact Momoo that used to be part of the Arlong Pirates. After Nami asks if it remembers her, he stares at her then realizes Sanji and Luffy are there too and he remembers what they did to him in the past. So when Caribou is talking all big and getting his men to attack, he jumps through the bubble onto the Sunny. He starts telling his men to come over, but then he turns around slowly to see his ship missing because Momoo swam away in fear. I couldn’t stop laughing at his face I completely read the words oh sh*t. 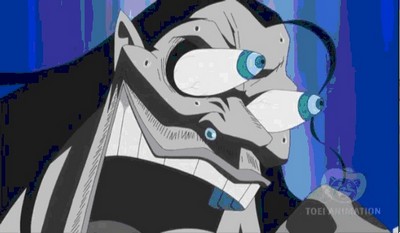 After he started begging Franky not to throw him out into the ocean and he says you should value a peoples life when before he was planning to kill all of them, the irony is just hilarious. Caribou continues to just blurting out excuses and its funny how Usopp the king of lies; he even states how ridiculous they are. Of course Chopper as naïve as ever believes it at first. But I guess it’s a running gag right now, Chopper believes almost anything he hears first just like Sanji and his excessive nose bleeds when looking at beautiful woman. Caribou looks at Nami and starts talking about her then Sanji kicks him in the face feeling proud of himself he goes and looks at Nami and is blasting off again. 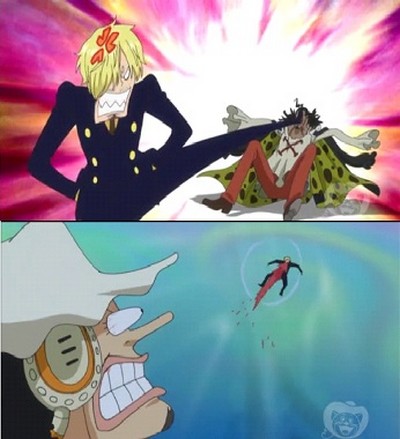 I really liked the part when Nami states that it’s about to get really cold, since their going deeper in to the water. So Brook starts off with saying how he can feel it on his skin and right when he’s about to deliver the punch line, Chopper say “You’re a skeleton – you don’t have skin.” Which makes Brook fall into depression, since his joke was ruined. 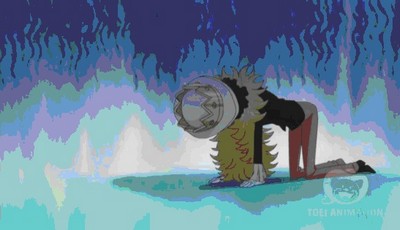 Next Nami starts going into detail all about the currents in the sea and how one of them will help them reach deeper into the sea. But right after she’s done explaining Chopper, Usopp, Luffy, and Zoro all just look out to the sea. Then all of sudden they each have a cup a tea and become happy since there are wonderful currents, getting Nami angry since they weren’t even paying attention the whole time. But the downward current look pretty cool with the speed it went down it was like an underwater waterfall. 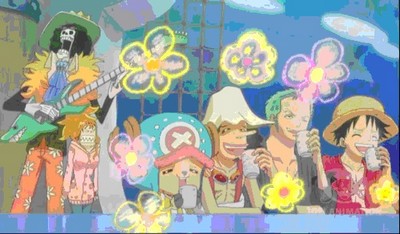 Then it focuses on these two big glowing yellow eyes, which definitely doesn’t mean anything good. I loved Usopp’s reaction when he turned around, it saw the Kraken, his face was just priceless and how Robin is calm and just sketching the Kraken. Same with Luffy, he just says that he wants to tame the creature, Usopp starts trying to convince him it’s to big and they should run and such. 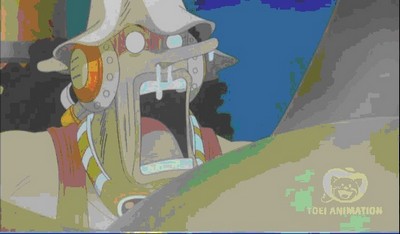 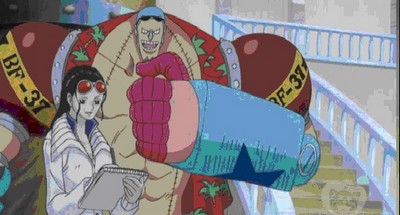 Sanji gets back up and you see his rehabilitation pictures he looked at, so when he sees Nami he looks as if he’s going to explode but just gets a normal nosebleed. The next part was just too funny, Caribou’s crew comes back for him and Caribou is all happy. Then the Kraken destroys the boat and Zoro just states that his crew looks like a school of jellyfish, got to love those little moments of Zoro’s humor.

Since Luffy, Zoro and Sanji are determined to go after the Kraken, Caribou gives them these bubble suits that allow them to fight normally underwater. This leads to the coolest scene of the episode where the Kraken tries to attack the ship and Franky shoots it with missiles, Chopper uses his guard boost to stop all the tentacles. Robin also uses Gigantesco Mano to stop the ship from colliding into rocks, I also really liked the faces on Brook, Usopp and Chopper as they almost hit it face first. But in the end it was really awesome to see the Straw Hats teamwork and I can’t wait to the conclusion in the next episode. 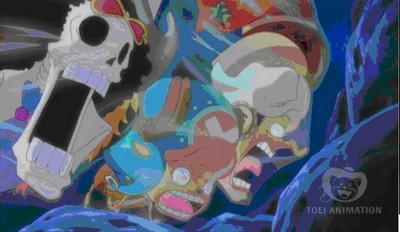