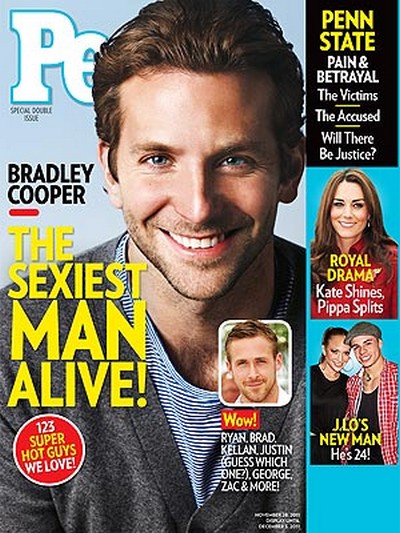 The current issue of People Magazine crowns Bradley Cooper as the Sexiest Mans Alive by People magazine.  The ‘Hangover’ star has been awarded the annual title by the publication and although he is honoured to win he admits he is shocked because he doesn’t think he always looks great.

He told the magazine: “I think it’s really cool that a guy who doesn’t look like a model can have this [title]. I think I’m a decent-looking guy. Sometimes I can look great, and other times I look horrifying.”

Although he is delighted to be named the Sexiest Man Alive, the 36-year-old actor insists his mother Gloria will be more proud of his win than him.  Bradley – whose father Charles died in January – added: “The first thing I thought was, ‘My mother is going to be so happy.’ “

People magazine will publish its full list of the 100 Sexiest Men Alive in their next issue which hits newsstands on Friday (18.11.11).

Justin Bieber on Holiday Special of ‘So Random!’

Who Is The Mystery Women Joe Jonas Was Seen With?