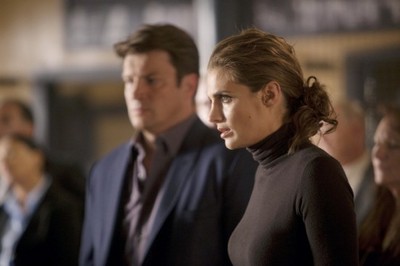 Castle is back tonight with a whole new episode.   Tonight is the ninth episode and it is called ‘Kill Shot.’ and we have the synopsis and the sneak peek video for you below.

On ‘Heartbreak Hotel’ which aired 2 weeks ago it was Viva Atlantic City and we started with an Elvis impersonator and with the investigation of a murder of an Atlantic City casino owner.  Beckett and Captain Gates work the NY leads together and Castle chooses to join the detectives for a road trip to Las Vegas.  If you missed the episode you can read the official recap here!

Episode Synopsis for Kill Shot: The team has their toughest case ever when a sniper on a killing spree in New York City has no apparent motive. The case is especially hard on Beckett as she tries to hide her progressive PTSD moments which are surfacing.

AnnaLynne McCord Turns Heads on the Set of ‘90210’