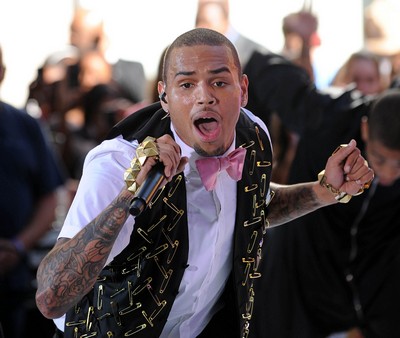 Chris Brown has bought a $1.5 million Hollywood Hills mansion.  The ‘Champion’ singer and girlfriend beater swapped his West Hollywood condominium for the 2,500 square feet residence after he racked up thousands of dollars in parking fines – which were later dismissed – because the parking spaces allocated to his previous home were marked for disabled drivers.

A source told RadarOnline.com: “This is a much better fit for Chris. He won’t have to deal with pesky nosy neighbours or parking issues. Chris is much happier at his new house.”

“Chris still owns the condo, but is involved in litigation now because of the various issues he encountered while he lived there.”

As Chris moves into the exclusive Los Angeles neighbourhood, his former girlfriend Rihanna – who he was convicted of physically assaulting in 2009 – is moving out, putting her 8,500 square foot home on the market for $4.5 million, despite paying $6.9 million for it two years ago.

In August, the Barbadian beauty filed a lawsuit against the property developer for the eight bedroom, 10 bathroom home claiming it was poorly constructed and vulnerable to leaks when it rains.

A listing for the property explains that it has “significant water intrusion and moisture issues throughout” as well as “encroachment issues.”

It adds that the property may be “subject to short sale” and that the seller “will consider all offers.”