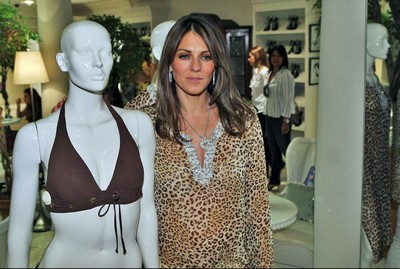 Hard to believe though it may be Elizabeth Hurley insists that she used to look “frightening” when she was 18.

The actress-and-model went through a rebellious stage in her late teens and got a nose ring and had spiky pink hair and she thinks because of her appearance she was safe walking the streets, even in the roughest parts of London. No way any woman’s appearance can insure their safety ion the street.

She told The Sun newspaper: “I moved to London when I was 18 and stayed in a hideous dumpy flat in Finsbury Park. I did not know it was a dodgy area at the time. Besides, I probably looked so frightening myself, no one came near me.”

Hurley – who is now groomed to perfection and is famed for her glossy long brunette locks – is glad she rebelled in her teenage years as it allowed her to be more confident in her life.

The 46-year-old beauty – who is engaged to Australian cricket legend Shane Warne – said: “I am sure that everyone does these silly, rebellious things from time to time. It was just mine had gone on a little too long. It was probably good for me. I have not worried too much about fitting in ever since.”