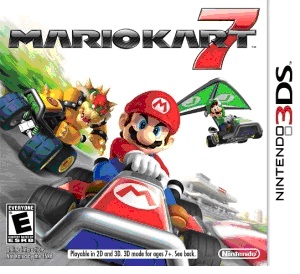 The Mario Kart games have always been amazing. Playing any Mario Kart game gives me a nostalgic feeling, it make me remember the good old days when I was playing Mario Kart on the SNES and Mario Kart 64 on the N64. Those games were great, I some what miss them since they were a part of my childhood.

All of the Mario Kart games that have been released so far have been great and tons of fun, but there’s one game in the series that I find is the best out of them all. Mario Kart: Double Dash!! was the sh*t, I must’ve played that game  for several hours everyday, the new multiplayer aspect in that game was so cool and different compared to the other games. You and your friend were able to both ride on the kart, one drive and the other is hanging on the back of the kart throwing items you pick up. That’s not all, say you get tired of driving or your friend gets tired of throwing stuff at the other drivers, you can both switch places. I’d like them to make another Mario Kart with that same multiplayer aspect; it was a good addition to the game and made it a whole lot more fun.

Mario Kart 7 will be introducing a few new characters. I’m a sucker for new characters being added to any Mario game, just hearing this gets me super excited. Confirmed new comers joining the race will be Lakitu they are technically Koopas with glasses who float around on clouds while tossing spiny eggs, Metal Mario, Honey Queen the Queen bee who appeared in Super Mario Galaxy 1 and 2 and Wiggler a creature that resembles a caterpillar, the only thing different is that it has a flower growing out of it’s head and some fresh kicks. I’m excited for the returning unlockable character Shy Guy everyone loves Shy Guy and the character I’m most excited for is Wiggler, a caterpillar with some fresh kicks? Hell yah! New to the game, is that not just Item Boxes will be found on the track but also coins. Coins are simple to collect you just need to simply drive through them, each coin you get increases your speed and the max speed you can hit is 10 coins. Also collecting a certain amount of coins on the tracks will unlock vehicle parts for you to use to customize your kart. All the old items that can be found in the Item Box will be usable like the Banana Peel, Green Shell, Red Shell, Mushroom and etc. but we’ve got three new items the Fire Flower, Super Leaf and Lucky 7. It’s about time they’ve added the Fire Flower and Super Leaf they’ve been items in games like Super Mario World, Super Mario Bros. 3 and etc. they are very well known to fans of the franchise even to those who aren’t.

Lucky 7 looks and sounds awesome it makes 7 items circle around like it does when you get a Triple Green Shell, the 7 items are a Green Shell, Red Shell, Banana, Mushroom, Star, Blooper and Bomb-omb I can’t wait to get to use this item.

Something that’s amazing is that you’re able to now fly through the air using gliders and you’re able to drive under water using a propeller. You don’t have to select from a bunch of character karts, now you’re able to fully customize your own kart you get to choose the body, wheels, glider and propeller you want, you literally get to pimp your own ride depending to the track you’ll be racing in. Online won’t be up to 12 players like it was in Mario Kart Wii, there going old school with only 8 players online. But what’s been brought into the game that was from Mario Kart Wii is that you’ll be able to perform tricks. Interesting to see is that they’ve added a first person view for you people who I don’t even know why prefer it that way, I’ll be honest with saying that it looks pretty cool and I’ll  try it  but I’ll stick to overview. 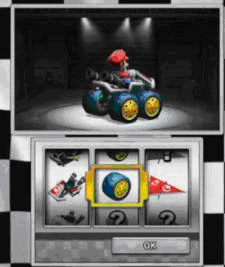 Mario Kart 7 will have a total of 32 courses, 16 new courses and what I think is a brilliant idea 16 retro courses. I’m excited for the 16 retro maps for example Daisy’s Cruiser a course from my favourite of the series, Luigi’s Mansion, Kalimari Desert from Mario Kart N64 and much more. The new courses that I like so far are Cheep Cheep Cape an under water course, Shy Guy Bazaar takes place in the desert with a palace as well, Piranha Plant Pipeway and there’s so much more but I’d just be talking for ever if I talked about them all.