Paper Mario, is one of my favourite RPG series. Paper Mario was amazing when I was a kid the next game Paper Mario:  The Thousand-Year Door was perfect, I seriously replayed that game more than three times. The third installment to Paper Mario was just horrible; I seriously didn’t like Super Paper Mario for one main reason, they got rid of the RPG element and the turn based-battles that made the game so amazing and changed it into a sidescrolling-platformer. It was just a huge disappointment. Now the Super Mario 3DS has got me excited all over again, they’ve brought back the RPG and the turn based-battles back to the game and I can’t explain how happy I am.

Sad to say there’s no information on what the plot and setting to this new game will be, I have huge expectations for this part since the other games had an interesting plot. Except for Super Paper Mario…

New to the game are stickers. Stickers are very important to the game; they have the ability to give Mario power ups for example the Frog Suit. The stickers are able to help Mario overcome obstacles in the game. Also new is the “battle chance” feature it’s a Slot Machine and is similar to the Bingo! Slot Machine in Paper Mario: The Thousand-Year Door. 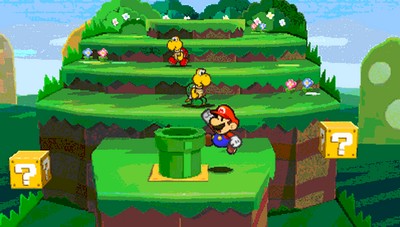 The best part about the Paper Mario games in my opinion is the Partners your able to find to help you on your journey. I have favourites for each game, for Paper Mario I like Sushie the Cheep-Cheep and for Paper Mario: The Thousand-Year Door I liked the Yoshi you got. So far there are only three confirmed partners for Paper Mario 3DS, a Chain Chomp, a Green Toad and an unknown silver crowned shape like thing with eyes, no information on this partner yet. 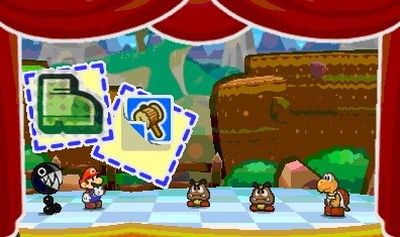 All I can say is that I’m way too excited for this game, I can’t wait to see how they use the 3D aspect in a Paper Mario game I think it’s going to look pretty cool. I hope that later on Nintendo can make a game called Paper Luigi and base it off the story of his adventures he tells you about in Paper Mario: The Thousand-Year Door… now that would be truly awesome.