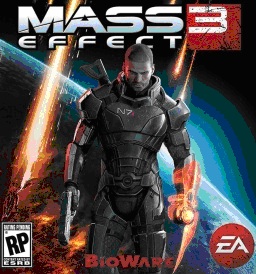 The Mass Effect series are one of the best in my opinion. I’ve played the other Mass Effect games and loved them both. When I got Mass Effect for the first time it literally blew my f*cking mind. I was just shocked at how good the story and dialogue was, also the characters were very well done. There were some flaws in the game but it was alright. Then I heard about Mass Effect 2 coming out, this game also blew my f*cking mind. Everything that I thought were flaws in the last game were improved, the graphics were beautiful, the new characters introduced in the story were once again well done, the dialogue was great, the plot was amazing especially the ending.

Now let’s talk about Mass Effect 3, the plot amazing as always. Mass Effect 3 starts right where you left off in the Mass Effect 2 DLC called Arrival. Now Commander Shepard is on planet Earth for trial due to the events that took place in Mass Effect 2. While Commander Shepard’s trial earth gets attacked by the Reapers. Shepard knowing that the odds of him winning against the Reapers now aren’t so high he flees from planet Earth in search of support from the other alien civilizations to help with a counter attack against the reapers. You also have to deal with Cerberus now since they’ve decided to turn against you.

Like Mass Effect, 2 in Mass Effect 3 you will be able to import you’re character. You’ll be able to change you’re characters class and appearance. If you import your character due to the more features added to customizing, your character since new features and hairstyles have finally been added. Shepard will have some powers in the beginning. What I like is that I heard that when you finish the game you have the opportunity to play a New Game+ which allows you to continue to play the game or start it again with all the things your Shepard has when you finished the game in case you forgot some collectibles or just want to replay the story.

Mass Effect 3 will have three campaign modes called Action Mode, Story Mode and RPG Mode. Action Mode will not allow you to choose what you’re character says, it’ll give you an automatic response and it will make you’re combat difficulty on normal. Story Mode is the exact opposite of Action mode, easier combat difficulty and you get the choice of what you’re character says. RPG Mode gives you a normal combat difficulty and the choice of what you’re character says. I think that they just wanted to let players to choose how they prefer to play the game, to me RPG Mode sounds the best in my opinion. The RPG elements in Mass Effect 3 have been improved compared to Mass Effect 2, the levelling system has been improved with more detail and depth, now you start off following one branch of skills that later split off into two branches. It’ll be a difficult choice to decide which you’d like to take. You also have the weapon customization, it’s improved allowing you to add scopes, barrels, mods and different ammo types.

Yes characters from the previous Mass Effect games will be reappearing depending whether they died in your last play through. For example Garrus, Wrex, Tali, Mordin, Miranda, Ashley and much more will be reappearing. They’ve made the availability of permanent squad mates smaller compared to Mass Effect due to wanting to make the relationships deeper and more interesting, which I think is a good thing.

The cover system has been improved in the game also the sprint capability, combat rolling and the use of climbable ladders there wasn’t a lot of climbable ladders in any of the games. They’ve finally added a melee system in the game I can’t wait to punch in the skulls of aliens and stab them with my tech-blade. Apparently the game is going to be the most difficult in the series; it’s going to be great.

This game is going to be so amazing; the multiplayer mode that’s being added to the series looks simply fantastic. This is definitely going to be worth my money, I’m going to pre-order it as soon as possible. I can’t wait for my mind to be f*cking blown once again.