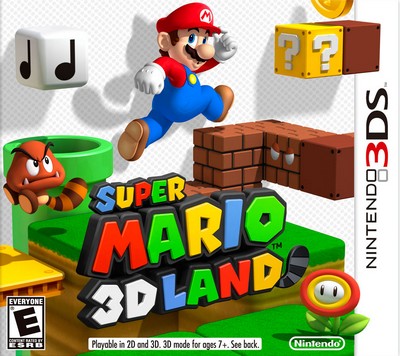 Before I start talking about how great this game is, I got to admit that I’m a sucker for Mario games. Super Mario World for the SNES was my first game ever and since then I’ve played all the Mario games that have come out so far and loved all of them except for the cross over Mario and Sonic at the Olympic games; those types of games in my opinion are just pointless.

The plot of the game is good and simple. There’s a tree that stands on Princess Peach’s castle grounds, a storm comes rolling in causing all the leaves to be blown across the Mushroom Kingdom. Turns out that these aren’t ordinary leaves at all, they’re Super Leaves that give Tanooki tails to any living thing they touch. The next day Mario and three toads go to check on the tree. They find a letter from Bowser learning that once again he’s kidnapped the Princess. Mario sets off for an adventure to find and rescue the Princess.

Super Mario 3D Land is technically a 3D Mario game, but is played as a 2D Mario game. Something I like about it is that it’s more similar to its side-scrolling games in which the goal of each level is that you got to find the flag pole at the end before you run out time reminds me of the original Super Mario Bros. for the NES. Also it has the same kind of health system as it did in the original. Instead of losing pieces of your heart in Super Mario Galaxies you shrink when you get hit by an enemy.

What I love the most about the Super Mario games are the awesome power ups you can get. The original power ups Super Mushroom, Fire Flower and Star Man are in the game. They’ve also brought back the Super Leaf from Super Mario Bros. 3, the Super Leaf gives Mario the Tanooki costume which give him the ability to attack with his raccoon tail and glide in the air. But there are some new power ups like the Statue Leaf it allows Mario to turn into statue making him invincible to enemy attacks, Boomerang Flower, Invincibility Leaf and the P-Wing. What’s pretty cool is that when you die five times in a single level you’re given the Invincibility Lead, ten times and you’re given the P-Wing which brings you to the end of the level.

The graphics for this game is pretty good and the 3D compliments it perfectly. The game is very fun, when you beat it you unlock Special Worlds that are a replica of the worlds you’ve already done but different as in more difficult, it’s almost like it’s not a replica. What I like is when you can unlock a new character to play like in Super Mario Galaxies when you collect all 120 stars in the game you can play as Luigi. In this you get to also unlock Luigi by completing the first special world. Its awesome how Luigi is played differently for example he can jump higher.

In the end this game is worth it if you own a 3DS and are a fan of the Super Mario games like I am, I haven’t beaten all the special worlds yet but all I can say is that this game is amazing.

Anime Review: One Piece Episode 523 ‘The Man Who Protected The Sunny’

Has Jennifer Lopez Given Bradley Cooper The Boot And Moved On To Dancer Casper Smart?