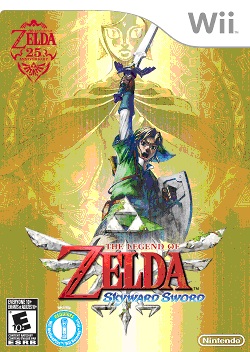 The Legend of Zelda series have all been amazing, but there’s only one that is my most favourite out of all of them. The Legend of Zelda: Majora’s Mask is in my opinion the best out of the series and my most favourite. It’s a game that I can play and never get bored of it no matter what. I love the incorporation of masks in the game with all their unique abilities that they give Link, the best are the three transformation masks. C’mon playing as a Deku, Goron and Zora that’s pretty damn right awesome! The puzzles in the game were really fun and the temples were pretty cool especially the water temple, sure it was difficult but it had a really cool look to it. People say video games aren’t an art, when I look at this, it’s a master piece!

This leads to my excitement for The Legend of Zelda: Skyward Sword. The Legend of Zelda is well known for its confusing chronological order; Skyward Sword is a prequel to Ocarina of Time which is an awesome game. The plot to Skyward Sword is very interesting; the protagonist is an incarnation of Link who has been born and raised on Skyloft, which is a group of islands in the sky above the clouds. Link lives an everyday ordinary life, but one day he stumbles upon discovering the Skyward Sword. The Skyward Sword leads him to a new unknown land beneath rule by an evil force. Sounds pretty cool huh? Another thing is that Zelda is no longer a princess in this game she’s just Links’ childhood friend and the sword can take on the form of a female.  Apparently this game will elaborate on Ganondorf’s origin I can’t wait for that.

With the sword there are many items that can be used for example you can use the bow, bombs, bug catching net, empty jar and slingshot which have been in the previous games. There are a couple of new items like the Beatle which is a small mechanical device that can fly to reach areas that Link can’t, the Goddess Harp which is like the Ocarina, Mogma Mitts are used to dig in the ground, Gust Bellow and my favourite the Double Claw shot.

What’s new is that an upgrade system has been introduced to the game, most of the items have upgrades available to them like the slingshot, shield, beetle and more. For an example of the upgrade system lets say the wooden shield you start off with, if you collect enough items off of enemies it can upgrade. A stamina meter has been added also to let you sprint and run up walls, drinking health potions doesn’t interrupt the game and what I find is very useful for players is easier maps to understand so you don’t get lost easily.

The controls look simple and fun, I like using the Wii remote and nun-chuck as a bow and arrow it just has an awesome feel to it. For a Wii game the graphics aren’t all that bad. In general this game looks amazing I hope this game is a master piece just as Majora’s Mask was.

Here’s a commercial for the game, my favorite comedian, Robin Williams is in it!  Enjoy!