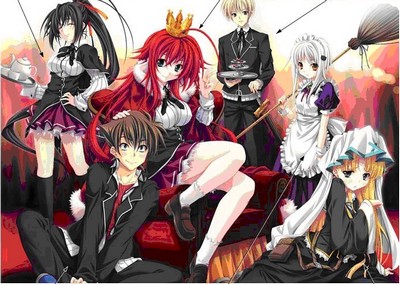 Japanese production company Media Factory has streamed a 131 second promotional video for an anime adaptation of Ishiei Ishibumi’s High School DxD on Friday. The music featured in the video is “Trip -innocent of D-“ by Larval Stage Planning.Tetsuya Yanagisawa is directing the anime, writing the script is Takao Yoshioka and with Junji Goto doing the character designs.

The stories protagonist is Issei Hyōdō, a stupid and perverted high school student in his second year who is killed on his very first date by the girl he’s with. Issei is reincarnated as a devil, and from now on, he is to serve Riasu, a high-level devil who is also the most beautiful girl in his school.

It looks like a typical ecchi, comedy, action, romance anime, it will probably have a lot of up skirt shots which the trailer gives a lot of examples.  But I think I’ll give it a try, the action looks quite promising and the story isn’t that bad either. It seems pretty interesting to me because I don’t think I’ve seen an anime yet that revolves around devils so this difference is appealing to and I think it could possibly be a good anime.