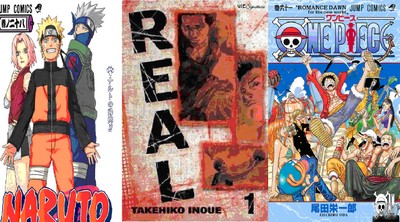 Third on the list with an approximate weekly sale of 172,402 copies is Naruto by Masashi Kishimoto. In all honesty I’m a huge fan of Naruto and it’s just been getting better and better. Right now the cliff hanger really has me anticipating the next chapter so badly and it’s really nerve racking knowing that Kishimoto is taking a break this week. To sum it up, Naruto is a great story about the importance of friendship and to never give up on your dreams, definitely something everyone should get a chance to read.

Second on the list which had an approximate weekly sale of 198,424 copies is a manga called REAL by Takehiko Inoue.  Now I’ve never actually heard of it before but I took the initiative and read the first chapter and honestly it’s an emotional rollercoaster. It follows the lives of three boys whose lives change forever because of incidents that are all relevant to each other, I don’t want to say too much because seriously it’s a very beautiful story that really makes you think about life itself.

First at the top of the list receiving an approximate weekly sale of 488,991 copies is my personal favorite One Piece by Eiichiro Oda. I’m incredibly surprised at how bigger the sales are between One Piece and the other manga. The one behind it which is Naruto sold 877,012 copies in total while One Piece sold 2,507,357 copies. The numbers are so far apart that it’s quite amazing. But I believe its deserving, One Piece is an amazing story. The characters are all original and have their own interesting personalities. But what I love most is the story, it faces a lot of problems that you just get absorbed into and you really just end up falling in love with it.

Lastly what surprises me is that Bleach not only didn’t make it into the top 5 but not even the top 30. Now I wasn’t a big fan of this new arc and I guess many other people are feeling the same thing. But I hope Tite Kubo can bring it back better then ever in the next arc, because it really saddens me to see such a great manga suffer like this.