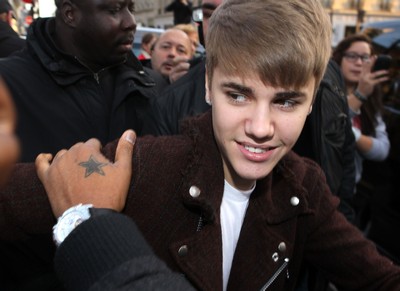 Justin Bieber is acting the gentleman amid allegations he fathered Mariah Yeater’s baby.  Justin has vehemently denied Mariah Yeater’s claims that he is the dad of her four-month-old son and is doing his best to stay focused on his work despite the speculation in his personal life.

He told New York radio station Z100: “Right now, I’m focusing on my album and the music and the Pencils of Promise charity we’re doing, and just being positive because Christmas time is a time for joy and happiness, so that’s what I’m thinking.”

Despite admitting the claims could damage his reputation as a role model, Justin was able to joke about the claims, saying he wishes he had been the target of a different story.

“They say that any press is good press – I do not believe that’s true. If you’re in the spotlight, then people are looking at you to be a role model, and if you’re doing bad things to be getting press, I think that’s really, really sad.”

Justin’s manager Scooter Braun has also hit out at Mariah and her legal team after her new lawyer said yesterday he intended to pursue the matter privately out of court.

“We will never settle with them. That’s my little guy right there – I protect him – and they messed with the wrong crew.”

“It’s false and people should be held accountable when they run out and say this stuff. And they have this lawyer running around saying, ‘Well, we want everything to be held confidentially now.’ But you don’t get to go out there and bad-mouth a 17-year-old kid to the entire world then suddenly think it’s going to stay confidential. We’re not gonna go away quietly.”

Demi Moore Has Had Enough She Is Divorcing Ashton Kutcher