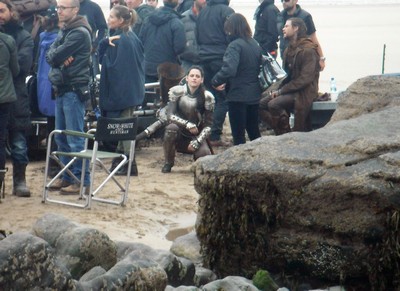 Kristen Stewart would “love” to do more ‘Snow White and the Huntsman’ movies.  The ‘Twilight’ actress portrays the titular beauty in the forthcoming film, and she admits she was initially dubious about starring in another franchise, but would now be very keen because she enjoyed working on the first one so much.

She said: “Oh man, to be totally candid and honest with you, when I first signed on to this thing, the idea of doing another franchise was like, ‘Wow, we’ll cross that bridge when it comes to it.’ It was so far outside my realm of thinking.”

“I was so focused on the first one, and I thought, ‘Maybe, maybe,’ but I’ve got stars in my eyes. I’m literally over the moon, about what I’m doing right now. I would love to do more ‘Snow White’ films.”

She told MTV News: “It made such a sound, it was in a scene. Girls, if you’ve ever wondered if it works, it works. It literally spun him right around. I was supposed to miss him by this much.  I basically knocked him right out of his close-up.”

Ashley Tisdale Hit The Gym In Juicy Couture & Other News!