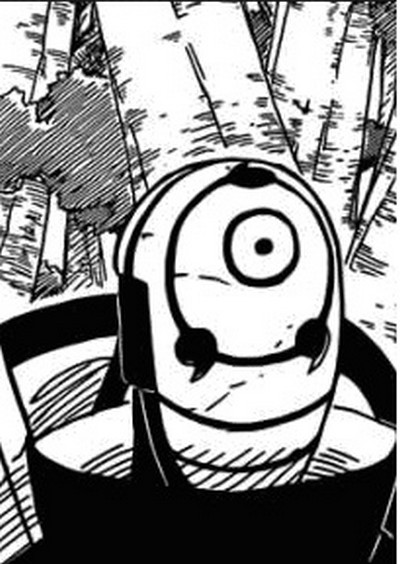 So right away we’re back to seeing Naruto colliding into Tobi head first! Then Tobi goes ahead and says “I should’ve slipped through you, but you couldn’t even scratch my mask.” Are you kidding? Really? I got so hyped up to finally have his identity revealed and it turns out that nothing happened. But I guess it keeps the readers more interested knowing that his identity could be revealed any second.

I found it pretty damn awesome seeing the other Jinchuriki under the Edo Tensei jutsu come out to fight Killer Bee and Naruto. We’ve got one who spits volcanic rocks, one that makes a mirrored reflection of Bee and Naruto, a guy who blows explosive bubbles and a chick with Sabertooth like finger nails. Also the reanimate corpses of the Jinchuriki have gotten a sharingan implanted, I only notice it with the two-tails but I’m pretty sure the other must have at least one as well.

I love how Naruto just tells him off that it doesn’t really matter who he is, in the end he’s just one person. So Naruto states he’s going to get rid of Tobi’s mask, but that damn bastard Tobi, right away he says “If you want to see what’s under this mask.” I’m just sitting there thinking “damn he’s going to take off the mask, holy crap.” He just says “Well you’re going to have to work for it.” Kishimoto teasing us like that, damn. It makes me anticipate the revealing of his identity even more!

I just can’t wait for next week, seeing this battle between Naruto and Killer Bee against Tobi and the reanimated Jinchuriki is going to be awesome. But there’s one character I’d like to do more, possibly Rock Lee. It seems like he really hasn’t been shown a lot so it just gets me thinking we should at least see a little more of him. Also where the hell is Itachi? I keep waiting and waiting for when he’s going to reach Kabuto, but apparently it’s as if he’s gotten lost and I thought Zoro had a bad sense of direction.