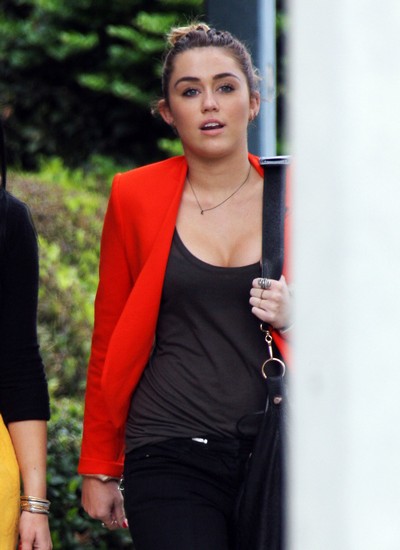 The 19-year-old singer and actress published a brief message on her micro-blogging account asking users to quit bombarding her close pal Kelly with hateful messages after the ‘Fashion Police’ star defended Miley’s jokey comments that she “smokes too much weed” in a video which was leaked from her birthday party.

Miley wrote: “Please stop bombarding my friends twitter pages with rude comments. NOTHING gives you the right to threaten people. I love u @MissKellyO :)”

The trouble began after pals presented Miley with a Bob Marley birthday cake at the bash arranged by Kelly in Los Angeles last Tuesday.

In a leaked video from the party, Miley is seen saying: “You know you’re a stoner when your friends make you a Bob Marley cake. You know you smoke way too much f**king weed!”

Alluding to an incident last year when footage emerged of Miley smoking a bong water pipe which she later claimed contained the legal hallucinogen Salvia, Kelly replied: “I thought salvia was your problem!”

However, a spokesperson for the former ‘Hannah Montana’ star has denied she was referring to her own drug use in the video.

They said: “It’s all been taken out of context. The cake was a joke and Miley’s response was intended to be sarcastic.”

Kelly later took to her twitter page to defend the comments in the clip and slam the person who leaked the footage, which has since led to her being targeted.

She wrote: “Let me make something very clear after @MileyCyrus salvia incident we started calling her Bob Miley as a JOKE! The cake was also A JOKE.  It makes me sick that @Miley Cyrus so called ‘friends’ would sell her out and lead people 2 believe she is someone that she is not!  U guys if @MileyCyrus is not recording/filming/touring she is works everyday how could she possible do all that if she was a stoner! #think.'”

Take a drug test Miley or shut up.