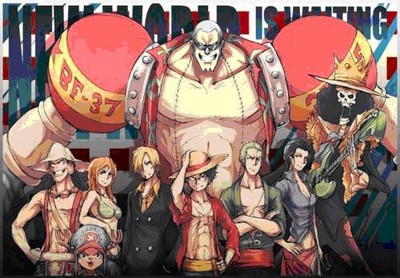 On Saturday while airing the One Piece movie Strong World on Fuji TV there was teaser, it announced that One Piece will in fact have another movie set in the New World Arc. The teaser said, “Urgent announcement! Production on the greatest film in One Piece’s history — the newest theatrical film which will surpass Strong World — has been green-lit!! The curtain now opens on the first battle in the New World arc on the final seas!!”

The last One Piece movie made was Strong World which was in 2009, I’ve watched it and honestly it was incredibly amazing. But this brings excitement to a whole new meaning. One Piece this fall had a time skip which was considered the New World Arc and the anime followed it into around October. As a One Piece fan boy I can’t describe how amazingly excited I was for this. One Piece is actually my most favorite anime/manga. I actually can’t say I hate any of the main characters part of the Straw Hat crew, I love them all.

When I see the teaser state how this movie is going to be the greatest film in One Piece’s history, I just get anxious and excited to see this movie. I just can’t help but wonder how the story of this will go, because One Piece’s movies never really followed the main plot. Also in some of the movies, for example Strong World, they gave the characters a whole new design on their clothes, I wonder if they’ll do the same. But I kind have a feeling that a new design for the film would actually be f*cking awesome.

For one thing the animation in Strong World was simply amazingly beautiful; I just can’t wait to see what they can do with it now. I for one hope Usopp does much more fighting, because he’s actually my most favorite member of the Straw Hat pirates. Especially after the time skip, Usopp has become a total bad ass.

In conclusion, it’s impossible to even describe how much I’m going to be anticipating this movie all year. I’m going to be keeping update with information released about it, especially the plot. One thing that sucks is that these movies take a long time before their released with English subtitles in North America, so I have no idea how long I’ll be able to wait. One Piece is something I love so much, that I just can’t put it into words and just this announcement has got me so inpatient for at least a trailer.