Proof That Video Games are taking over the Entertainment Industry 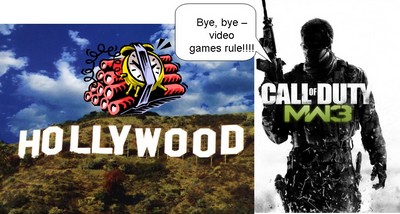 Throughout the years it used be all about television and the movies, everyone was asking what’s the new biggest block buster this year?  Now it’s different, whenever I talk to someone, we never talk about what new movie is coming out this year, we talk about the new upcoming video games.

Want proof that videogames are taking over the entertainment industry? Well hear you go. Call of Duty’s Modern Warfare 3 has made $755 million in sales… in only five days! That means it’s made more money quicker than the hit movie “Avatar” and the Super Bowl. it’s quite amazing, Activision are a bunch of lucky bastards. Why are videogames taking over? It’s quite simple really, with a movie you pay about $10 dollars to see at your local theatre and the entertainment lasts for an hour or two. With videogames it usually costs you $60 dollars or a little more sometimes, a monthly fee might be included if you’re into MMORPGs , the cost is five times more but it will keep you entertained much longer. Technically the same as a movie, both have dialogue and a plot, the only thing is with games you get to play the story, which I find is more entertaining than watching. Also if you have internet, you get multiplayer for some of these games which can make it last longer.

The Call of Duty franchise is very popular so I’m not surprised by their amazing sales, what I like the most about Modern Warfare is that it has always been the single player campaign since the plot has always been amazing, action packed and dramatic. I’ve played many of the Call of Duty games, my personal favourite is World at War since it introduced Nazi Zombies which has become very successful.

The sad thing is I never got to finish Modern Warfare 3 since I didn’t buy It; because I already bought Skyrim, Saints Row: The Third and pre-ordered Star Wars: The Old Republic. I’m not big on First Person Shooters to begin with also, I’m more into the RPG genre of gaming. I only played it at a friend’s place when the game was released, the campaign was very fun from what I played of it.  The survival mode was better than I expected, I like how none of the enemies have fixed locations. The multiplayer was quite improved no more kill streaks but Pointstreaks and their not given to you with just kills, doing objectives gives you them also.

There are three Strike Packages called Assault, Specialist and Support each give you different Pointstreak rewards. Only thing that disappointed me was the graphics, it wasn’t any different from Black Ops really, I know graphics aren’t everything to a game but it still would been nice if they took the time to improve that aspect being a new game and all.

Activision is doing very well in the gaming industry; Modern Warfare 3 is very successful. The Call of Duty franchise all together has earned more than $6 billion dollars.  I can’t wait to see what they’ll do next.