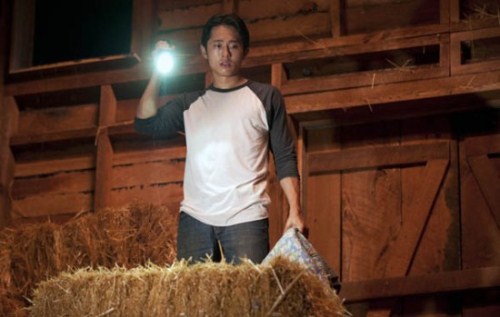 The Walking Dead is based on a graphic novel set in a post zombie apocalypse and I love seeing a lot of zombies, who doesn’t?

Official synopsis for Episode 5: While searching the woods for clues, Daryl is seriously injured and is set upon by walkers. Meanwhile, Rick second-guesses himself, and Glen believes he is getting positive signals from Maggie, but then isn’t so sure. Glenn, the only one breaking barriers between both groups, knows far too much for his comfort level. Daryl finds a sign of life, in his delirium, tries to make it back to the farm alive. The group makes a plan that Hershel disagrees with adamantly.

There are three episodes left till break with a major cliff hanger, then another six after the holidays. My guess is that Merle’s return will spice things up on the show.

There are rumours that Daryl gets bit by a walker and gets turned into one, or is it Daryl’s brother and he’s returned? It wouldn’t be too far fetched that his brother returns because Daryl is a hunter/tracker, so his brother is probably the same since they were brought up together.

Will we find out what happened to the little girl? I hope so, she’s probably dead anyway – eaten by a group of walkers; they need to move on from that storyline.