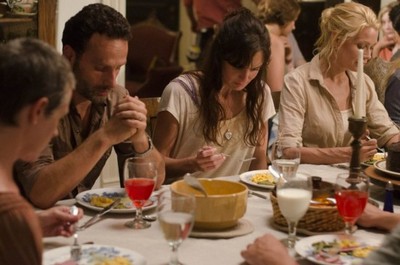 Every Sunday night, fans are tuning in to The Walking Dead, the zombie series and tonight’s episode # 5 is titled “Chupacabra,” and so far I think it is going to be a great episode.

Tonight the group makes a plan to try to feel more safe, but Hershel doesn’t like it one bit and tells everybody that they can stay for a while, but that’s it. Glenn feels that all the women have been acting weird and doesn’t know why. He tries to talk to Dale about it, who quizzes him a bit about who is acting differently and why. Dale doesn’t like that Glenn is trying to get close to Maggie, she’s worried about how Dale’s father might react.

Meanwhile the search is still going on for Sophia. Rick and Shane get into a bit of an argument and Shane lets Lori know that he’ll do whatever he can to keep her safe, while lets him know her and her son are not his problem any longer. It looks like tonight is going be a great episode with lot’s of action.

Sorry my AMC went down but found a recap – GO HERE