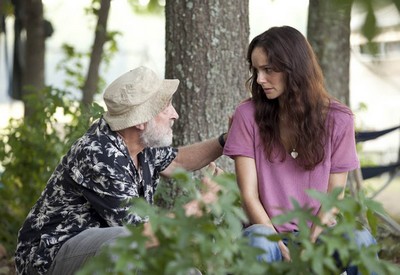 Every Sunday night, fans are tuning in to The Walking Dead, the zombie series and tonight’s episode # 6 is titled ‘Secrets’ ” and so far I think it is going to be a great episode. Stay tuned as we cover the show with up-to-the-minute details of the show.

Episode Synopsis: Secrets are told and secrets are revealed. Hershel refuses to acknowledge the world’s new reality. Andrea comes out of her shell. Everyone is becoming more and more aware that “everything is food for something.”

The Walking Dead returns this week with a whole new episode on AMC.  This week is the sixth episode of the second season and it is called ‘Secrets.’  Last week Rick was convinced that Sophia was alive, but Shane is convinced that she is most likely dead. Daryl got hurt in the woods when he was out looking for Sophia, attacked by Walkers and then when he returned he was all bloody and beaten, Andrea thought he was a Walker and shot him. Will Shane convince Rick to give up his search for Sophia? What are all the secrets about? Stay tuned.

Andrea was in the barn, she broke a chicken’s two legs, put in a bag and with a wheel-barrel she brought it to the barn wear the Walkers were and threw it down at them from the loft on the top – they all went crazy trying to rip it to shreds and eat it.

Meanwhile, Glen is keeping a close eye on the barn with the Walkers in it and asks Maggie why they are there.
Andrea goes to visit Daryl and brings him a peace offering, a book.

Glen is still bugging Lori about her being pregnant, he is upset that she didn’t tell Rick yet. He is concerned that she is not eating properly with her medical condition.

Rick is still bent on finding Sophia, he is planning another look in the forest in teams of two.   Carl asks Shane to teach him how to shoot and discovers that the kid has a gun. Lori doesn’t want him to learn and Rick thinks it is a good idea because then he can defend himself and tells Lori that he is growing up. Carl interrupts and tells his mom that he knows the gun is not a toy and he wants to help look for Sophia.  Glen tells Dale that there are Walkers in the barn and Lori is pregnant.

Dale visits Hershel and tells him that he ended up by the barn this morning and heard the moans. Dale tells him that they kill and Hershel disagrees, he says his wife and step son are in that barn and they are people. Hershel says Rick is a man of conscious and asks Dale if he is so sure about everyone in his group.

Hershel congratulates Lori on her son doing well with learning how to use a gun, she thanks him for his hospitality and he says with Carl getting better he is sure they will all be moving on now.

Shane is showing Andrea how to use a gun and goes a little too far when he tells her to pretend the target is the walker that killed Amy.

Lori approaches Rick about their having to leave, he already knows about it and is upset that he kept it from her.
Shane has a lead on Sophia and asks Hershel’s daughter to go with him to make up for being rough on her.

Meanwhile, Dale is cooking and Lori walks away as she heels nauseous. Dale starts telling her about a story when his wife was pregnant and during Thanksgiving she couldn’t be in the house for two days because of the smells. Lori tells Dale the truth about her pregnancy and reveals that she can’t tell Rick because she feels ashamed. Dale doesn’t understand her concern, but she doesn’t want to bring a baby into the world with all the fear, she doesn’t feel it would have a happy life.

Lori tells Glen that she changes her mind, if he would still like to take a run into town for her, she will take him up on his offer.
Glen and Maggie are on horseback, heading to town she is furious with him because he broke her trust. Hershel believes the Walkers are sick, that is why he is keeping them in the barn.  Maggie sees the Walkers as her family, not as monsters.

Glen gives Maggie a note to collect the things that Lori needs and all of a sudden a Walker grabs Maggie’s hand and tries to attack her, Glen comes to her rescue and hits him hard, the Walken gets back up and Glen savagely stabs him in the head.

Maggie and Glen return to Lori and Maggie loses it, throws her abortion pills at her and tells to go herself next time. Glen tells Maggie to calm down as she calls Lori a bitch. Maggie all of sudden walks towards Glen and kisses him, she calls him a leader and tells him that his friends don’t see it.

Shane arrives at a house with Andrea where he believes that Sophia just may be at, he finds tons of dead Walkers and then lots of live ones come out of nowhere.

Glen returns to see Lori and tells her that Maggie was attacked, she apologizes for asking him to go to town. Glen asks if the morning after pills will work and Lori doesn’t know, she actually has not decided if she wants to even use them, she might keep the baby. Glen asks if they are friends and she says yes, he tells her that her choice about the baby, she shouldn’t make alone.

Meanwhile, Andrea and Shane are in the car, they just escaped the Walkers and she grabs his privates, they start making up.
Lori takes about five of the morning after pills then has a rash change of mind, runs to the woods and makes herself throw up the pills.

Shane and Andrea are back, Dale asks what happened out there and Shane explains that they were over run. Dale follows Shane and tells him with that nice ride he has and all that gas, maybe he should just head out and leave. Dale tells him that he knows what kind of man he is, he thinks Shane ran down his own best friend.

Rick finds the morning after pills and goes to look for Lori, when he meets up with her he confronts her about the pregnancy. Rick wants to know how long she has known, she won’t tell him and he is angry that Glen knew and he didn’t. Lori explains that she was considering an abortion because they are having trouble protecting the son they have now. Rick tells her that they can make it work, shouldn’t they try? Rick tells her that they can live like this anymore and asks if there is anything else he should know about. Lori tells him that Shane and she slept together but he says he already knew.  Next week, Rick and Lori get closer, Shane tries to convince Hershel to let them stay and the Walkers in the barn get restless.

That is it for tonight, what did you think about the show?  Sound out in the comments below!