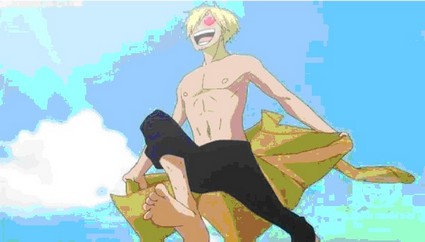 I only had one problem with this week’s episode and it so happens to be at the very beginning. I get how they have recaps from the last episode and such but the recap for this episode was over 6 minutes long! It’s just so long, it could make sense because they just got into Fishman Island so showing all that has happened before it does work but at least cut it to 3 minutes maximum, it was just too long.

Right after the very long recap the comedy starts right away, Nami sitting by the water and all of a sudden something is coming at her and its very fast. Thinking it could be one of the Fishman Pirates it turns out to be Franky jumping out of the water shouting “Super!” With his hair styled like a shark fin.

Now returning to Sanji and his time with the mermaid, its hilarious seeing his reaction and how his eyes have turned into hearts, his nostrils keep flaring, and he keeps jumping around. I also love when the ship with Neptunes sons is coming and the mermaid tries to hide Sanji, and it so happens to be that his face is in her breasts and the face he makes when he realizes it was just priceless.

Now after that we have Sanji bursting into the air from a massive nosebleed, one so bad that according to Chopper he needs a blood transfusion. So with him in critical condition Luffy, Sanji, Chopper and Usopp escape from Neptunes sons.

Honestly this episode didn’t have a lot to talk about, it focused a lot on Sanji and I found it hilarious. I hope there is more action soon though, maybe not in the next but definitely the episode after action will begin.