Gotham City Imposters is an upcoming first-person shooter game; this game will only be multiplayer online since it will be a downloadable for the Xbox Live Arcade, Play Station Network and Windows-Live.

In the game you are able to choose from two teams to play on, one side is dressed like Batman and the other side will be dressed similar to the Joker. For some reason I kind of like this idea of playing as an average guy or girl dressed up as a super hero or villain and fighting out to the death.

The character you play is fully customizable, you can customize his or her appearance, the costume they wear, the gadgets they’ll be using and some other aspects to the game. In the game you won’t just be using fire arms a melee weapons, you’ll be able to use gadgets like roller skates, gliders, grappling hooks and more. Also you’ll be able to use some cool and funny weapons such as the grenade disguised as a jack-in-the-box. 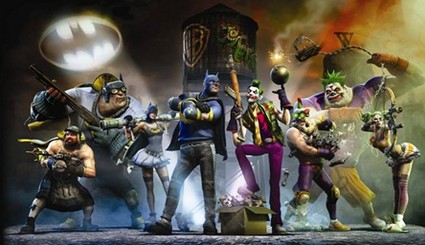 In my honest opinion this game doesn’t look all that bad; actually it seems to look better than what I was expecting from it. I’m not one hundred percent sure if I’m going to buy this downloadable game; I’m probably going to wait for more information or trailers to come out.