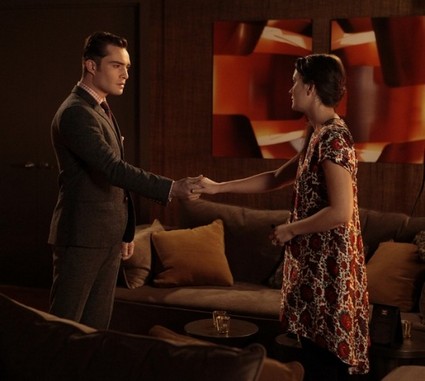 There was major buzz leading up to this Gossip Girl episode, titled “Riding in Cars With Boys,” and man, the hype was pretty realized.  The episode begins with Lily telling Charlie/Ivy that they are going to throw her a party to introduce her into UES society. Serena and Dan bicker through brunch and Rufus tells them it’s time to work it out. Dan realizes why he’s been so touchy lately— he’s still in love with Blair.

Meanwhile, the paparazzi continue to hound Blair, who is still on the outs with Louis, and can’t fit her massive engagement ring on her finger now that she’s further along in her pregnancy. Dan calls to confess his feelings but before he can say anything Blair decides she’s going to hide from the media at his Brooklyn loft.

Serena calls Dan and tells him he’s making a mistake “throwing his hat in the ring”. Dan tells her to butt out. Just as he’s about to share his feelings, Dan realizes that Blair is still in love with Chuck and he shuffles off while Blair calls Chuck. She asks him if he could love another man’s baby and basically says he wants no part in it.

Uptown, in a less sappy plot line, Nate tells Trip that he’s going away with their grandfather for weekend excursion with a bunch of financial power players. According to Granddaddy Vanderbilt, Nate it the new future of the family. He leaves Trip ripe for the evil picking as Max approaches him.

Louis and Chuck meet at Dan’s loft and find it empty. Meanwhile, Dan has blindfolded Blair. It turns out that they are at Charlie/Ivy’s party. Finally, in what we understand to be an act of ultimate love and sacrifice, Dan leads Chuck to Blair. They talk briefly and he tells her he will love her baby like he loves her.

Outside, Charlie/Ivy gets a call from Max who says he’s leaving town, but that he tipped off the paparazzi about her party and the truth. She freaks out and—in an attempt to take the heat off her— tells Gossip Girl that Chuck and Blair are at the party. Blair and Chuck flee the party through Central Park while Nate follows in an identical town car. The paparazzi chase them up the winding road. Suddenly, Nate sees their car crushed in the distance.

In the hospital, pained with guilt for causing the car chase, Charlie/Ivy confesses to Rufus that she’s a fraud but before he has a chance to comment a tearful Lily comes out and tells everyone that Blair is stable but Chuck is…

Is Chuck dead? Did Blair lose her baby? Was that car intended for Nate? Gossip Girl returns January 16th.