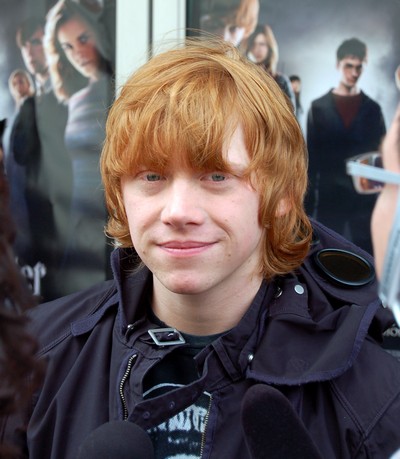 Star of the popular series Harry Potter who plays as Ron Weasley, Rupert Grint had an early Christmas surprise for students at a school in Birmingham, England this week. He handed out copies of the Harry Potter series’ latest movie at his surprise visit to the school. Rupert Grint walked right up on stage and unannounced at Bishop Walsh school after one of the students won a contest online to meet him.

Rupert Grint and his co-star Oliver Phelps talked to the students before they handed out copies of Harry Potter and The Deathly Hallows: Part Two, Grint admits that he’s never actually seen the movie. He said. “I don’t think I’ve ever seen a DVD, (of Harry Potter) I find it very strange watching it back!” I’d agree with him though, it be really weird watching yourself acting especially in the older movies when he was younger.

Personally I find this kid who won the contest to be incredibly lucky, since I myself actually really liked the Harry Potter movies. I must also admit that Ron Weasley was in fact my favourite character as well, I saw the last movie on the first day it was released in theatres. I must say that the movie was really well done, there were some parts that should have been elaborated on more but. all in all it was just an amazing movie.